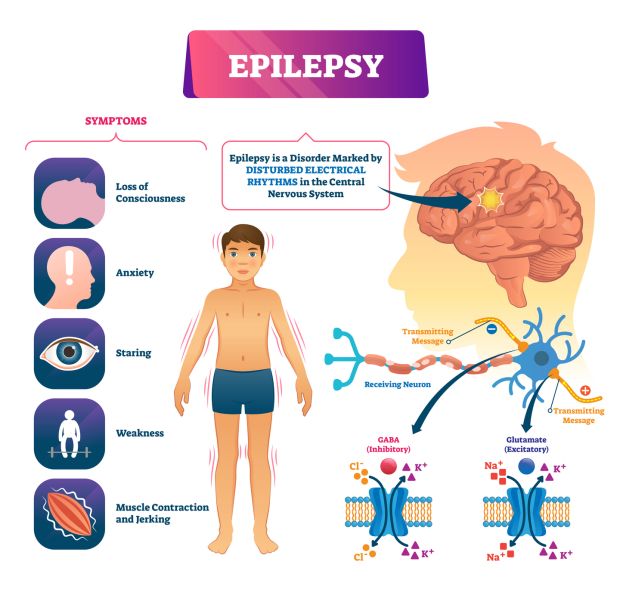 Epilepsy is a chronic and non-communicable central nervous system (neurological) disorder in which brain activity becomes abnormal, causing seizures or periods of unusual behavior, sensations, and sometimes loss of awareness. It is characterized by recurrent seizures, which are brief episodes of involuntary movement that may involve a part of the body (partial) or the entire body (generalized) and are sometimes accompanied by loss of consciousness and control of bowel or bladder function. It causes unprovoked, recurrent seizures. A seizure is a sudden rush of electrical activity in the brain.

Epilepsy  affects around 50 million people worldwide. Anyone can develop epilepsy. Epilepsy affects both males and females of all races, ethnic backgrounds and ages. Epilepsy can start at any age, but usually starts either in childhood or in people over 60. It’s often lifelong, but can sometimes get slowly better over time.

Seizures are bursts of electrical activity in the brain that temporarily affect how it works. They can cause a wide range of symptoms. Although the symptoms of a seizure may affect any part of the body, the electrical events that produce the symptoms occur in the brain. The location of that event, how it spreads, how much of the brain is affected, and how long it lasts all have profound effects. These factors determine the character of a seizure and its impact on the individual.

Epilepsy is not contagious. Although many underlying disease mechanisms can lead to epilepsy, the cause of the disease is still unknown in about 50% of cases globally. The causes of epilepsy are generally divided into the following categories: structural, genetic, infectious, metabolic, immune and unknown. Some example causes include:

Is there a cure?

There’s no cure for epilepsy, but early treatment can make a big difference. Uncontrolled or prolonged seizures can lead to brain damage. Epilepsy also raises the risk of sudden unexplained death.

How to care for Epilepsy patients?

Seizures can be controlled. Up to 70% of people living with epilepsy could become seizure free with appropriate use of anti-seizure medicines. Low-cost treatment is available, with daily medication that costs as little as USD5 per year. Discontinuing anti-seizure medicine can be considered after 2 years without seizures and should take into account relevant clinical, social and personal factors.

Some people need treatment for life. But you might be able to stop treatment if your seizures disappear over time.

Having seizures and epilepsy can affect one’s safety, relationships, work, driving, and so much more. Public perception and treatment of people with epilepsy are often bigger problems than actual seizures. Although the social effects vary from country to country, the stigma and discrimination that surround epilepsy worldwide are often more difficult to overcome than the seizures themselves. People living with epilepsy can be targets of prejudice. The stigma of the disease can discourage people from seeking treatment for symptoms, so as to avoid becoming identified with the disease.

Epilepsy can affect many parts of one’s life. It is usually a lifelong condition, but most people with it are able to have normal lives if their seizures are well controlled. The two most important things for epileptic individuals are: regular visit to the doctor and following treatment plans.

Most children with epilepsy are able to go to a mainstream school, take part in most activities and sports, and get a job when they’re older. Because you never know when a seizure will occur, many everyday activities like crossing a busy street, can become dangerous. These problems can lead to loss of independence. It is very important that epilepsy patients should not be allowed to go out alone, go near fires, streams or rivers or do some other things without supervision.

People suffering from epilepsy may have to think about their condition before they do things such as driving, certain jobs, swimming, using contraception and planning a pregnancy. Keeping a seizure diary can help to identify triggers so that they can be avoided.

It is advisable to join a support group for people with seizure disorders to help patients adjust to life with epilepsy. Eating healthy and balanced diets, coupled with regular exercise helps a lot. Medical devices that can give instructions can also be worn, so that people can know what to do when the patient is having a seizure and cannot speak.

So, there you have it people; epilepsy is neither a communicable disease nor a spiritual attack. When you meet a person having a seizure, especially if they don’t understand what’s going on, please help them! Also, do not make epileptic patients feel inferior, do not mock or insult them. Please feel free to share experiences and advice for people to become more aware.

What is Micro-cheating? Are you guilty?